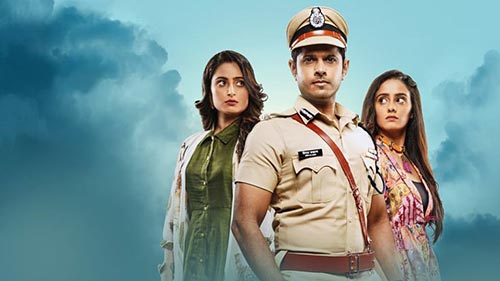 Sai gets furious when Jagthap humiliates her in the police station. While Bhavani blames Sai and questions her responsibility, she feels dejected.

Sai gets released from jail, and Virat vows to prove her innocence. When Jagthap and his men come to the Chavan mansion, Virat throws them out.

Jagthap makes Sai furious with his vile condition. Later, Sai gets emotional when the Chavans try their best to help her.

Virat is shocked to learn about Jagthap’s demands and confronts him about it. Later, Virat serves a shocking punishment to Jagthap, but his senior asks him to apologise.

Jagthap frames Virat as being corrupt, and the latter gets arrested. Later, Samrat beats up Jagthap when he sneaks into Sai’s room at night and tries to assault her.

While Jagthap gets hospitalised, Sai doubts the conversation between Dr Thurat and the nurse. Later, she probes the nurse and calls the police to arrest Dr Thurat.

Sai gets overjoyed after she finds out about her pregnancy and breaks the news to Virat. Later, Jagthap attacks Sai while she is out with Samrat.

Jagthap abducts Sai, but Virat rescues her. Later, Sai and Virat take an injured Samrat to the hospital while Pakhi prepares to surprise Samrat.

Samrat gives Sai and Virat the responsibility to take care of Pakhi before he takes his last breath. Later, Pakhi accuses Sai for Samrat’s death.

Pakhi blames Sai for Samrat’s death and refuses to let her be a part of his last rites. Later, Sai remembers her promise to Samrat and accepts her punishment.

Manasi refuses to take medicines from Sai and blames her for Samrat’s death. Later, Virat tries to talk to Pakhi when she asks Sai to leave the house.

Pakhi tries to throw Sai out of the house, but Bhavani stops her because Sai is pregnant with Virat’s heir. Later, the Chavans get another emotional shock.

Accusing Sai of killing Samrat and being responsible for all her miseries, Pakhi curses her. Later, Pakhi reminisces about the time spent with Samrat.

Pakhi’s constant nagging leaves Sai feeling stressed, and she falls down the stairs. In the hospital, the doctors inform the Chavans of her miscarriage.

Sai and Virat break down when the doctor declares that Sai can never conceive. When Bhavani finds out, she accuses Pakhi and orders her to leave the house.

Though Sai opposes Pakhi’s turn out, Mansi leaves Chavan’s house along with Pakhi. Bhavani feels agitated at the doctor’s proclamations about Sai’s pregnancy.

Sai suggests alternative modes of becoming parents as a solution to their problems but Virat rejects them. Elsewhere, Vaishali turns Pakhi against Bhavani.

Pakhi eavesdrops on Virat and Ninad’s private conversation at the cafe. Later, a fearless Pakhi conveys her wicked intentions to Vaishali.

To get closer to Virat, Pakhi decides to stay at the Chavan house with Mansi. Later, Pakhi threatens to lodge a police complaint if she is not allowed to stay.

Virat can’t accept Pakhi’s sudden change and feels dubious about it. However, Pakhi strongly desires to carry Virat’s child in her womb to gain his affection.

On the occasion of Samrat’s birthday, Virat hallucinates about him longing for a celebration. Later, Sai and Virat make a compromise.

Pakhi talks to Virat about missing Samrat and how she wants to fulfil his wish of having a child. Later, Virat and Sai go to a doctor for therapy.

Virat and Sai cheer up the Chavans with the good news about their therapy. Sai also declares her decision to find a woman to deliver their baby.

Pakhi’s constant pretentious act compels Sai to question her intention towards her and Virat. Later, Sai gives Pakhi a warning for interfering in her relationship.

Bhavani announces in front of the Chavans that Pakhi has decided to become the surrogate for Sai and Virat’s child. However, Sai and Virat question the idea.

Pakhi plans to use Virat’s baby to get close to him, but she learns she is not eligible for surrogacy. Elsewhere, a woman offers to help Sai.

Sai is furious to see Pakhi in Virat’s office. Later, Bhavani rebukes Sai for not accepting Pakhi as a surrogate mother, but she remains firm in her decision.

Sai and Virat discuss Pakhi being their child’s surrogate mother. However, Sai suspects Pakhi wants to use this as an excuse to get close to Virat.

Pakhi badmouths Sai before Geetha and her husband, causing a misunderstanding in the surrogacy process. Elsewhere, Sai gets robbed and falls unconscious.

Virat is unhappy as Sai fails to turn up at the hospital with the help she promised. Later, he defends her when Bhavani accuses her of shying away from her duties.

Sai visits the hospital and gets shocked to learn about Pakhi’s surrogacy. She gets infuriated at Virat and suspects Pakhi of misinforming Geetha.

Pakhi gets emotional and misleads Geetha about surrogacy. While Bhavani and Virat support Pakhi, Sai falls into trouble when Geetha denies identifying the latter.

Bhavani returns home with Pakhi and becomes overprotective of her. When Sai isolates herself, Ashwini consoles her.

The Chavans are surprised when Sai accepts the truth and warns Pakhi to take care of her child. Further, Sai and Virat spend an emotional moment together.

While Pakhi tries to get close to Virat, Sai guesses her ill intention and gives her an apt reply. Later, Sai confronts Pakhi and questions her motive.

Sai warns Pakhi and tells her that she understands her ill intention. Later, when Pakhi tries to get close to Virat, Sai takes a befitting move to give her an apt reply.

Pakhi is infuriated with Sai and makes a wicked plan to take away her child after the delivery. Later, Sai decides to find out the truth about Geetha.

Sai takes a stand for Pakhi when Bhavani stops her from wearing colourful clothes because she is a widow. Later, she questions Virat.

Pakhi is shocked when she learns that her pregnancy is complicated. Later, the armed goons, who Virat was chasing, attack Sai’s hospital.

Virat tries his best to get the goons to release the hostages. While the goons catch Pakhi and Bhavani, Jagthap gives them shocking information about Virat.

The goons threaten to kill Virat’s family if their demands are not met. While Virat desperately seeks more time, Jagthap informs Vithal about the situation.

Jagthap gets shot by the goons when he tries to escape. Sai lets go of her hatred and performs her duty by saving his life, which helps her contact Virat.

Virat risks his life to enter the hospital and rescues many lives from the goons. Later, Sai gets shocked to learn about the complications of Pakhi’s pregnancy.

Sai discovers the shocking truth of Pakhi’s complicated pregnancy and concludes that she deliberately planned everything. Later, she confronts Pakhi about it.

Virat gets applauded for his commendable work in saving the lives of several hostages. Later, he and Sai visit a temple to decide the name of their future child.

When Sai tries to advise Pakhi regarding her pregnancy complications, she creates a scene in the house. Pakhi calls up Virat and disrupts his meeting with the seniors.

To avoid pregnancy complications, Sai asks Pakhi to move her room to the ground floor. After learning about the foetus’s risk factors, Bhavani agrees with Sai.

Pakhi gets jealous when Sai wins the family’s heart. Later, Sai falls unconscious after learning a new skill from Ashwini.

Sai insists that Pakhi sign the papers about giving her newborn child to its parents. While Bhavani objects to the deal, Sai gathers family support.

To the Chavan’s shock, Sai gathers the neighbours to collect unbiased opinions and gets a majority of votes. Seeing the chaos, Virat gets annoyed.

Seeing Virat’s support for Pakhi, Sai feels shattered but adheres to her decision. When Virat and Sai argue, Pakhi goes away from the house.

Bhavani accuses Sai of creating trouble to make Pakhi take a drastic step. Later, Virat and Sai locate Pakhi and find her on the edge of a cliff.

Pakhi blames Sai for her deteriorating condition and gives her an ultimatum to stop interfering with the pregnancy. Later, Pakhi returns home after Sai agrees.

Bhavani is sure that Sai is pregnant once again, considering the positive symptoms. Sai reluctantly agrees to take a pregnancy test.

Pakhi threatens Sai about her unborn baby, leaving the latter shocked. Later, she falls down the stairs resulting in labour pain.

Virat decides not to take Pakhi to the hospital due to the heavy rain. In an unprecedented situation, Sai, who is at the hospital, decides to conduct Pakhi’s delivery at home.

Despite the complications, Virat completes Pakhi’s delivery and brings out the baby. Sai returns home and is ecstatic to hold the baby in her arms.

The Chavans celebrate a new generation of the family and thank Pakhi for making it possible. Later, Sai offers to be friends with Pakhi.

Premiere episodes of Lost in Love air on Star Life from Mondays to Sundays at 19h00.